We spend a lot of money on barn equipment and rations, while water plays a huge role 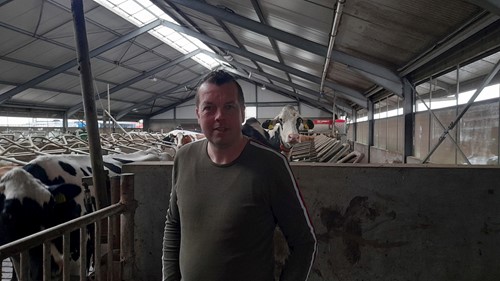 The Timmerman family keeps 80 dairy cows in Rouveen, in the province of Overijssel, close to Staphorst. The barn was newly built in 2007 and initially production and health went well. Gradually, however, the claw and udder health, and thus the production, declined. Since two years, the business is flourishing again, because after years of searching and trying, good water in the drinking trough proved to be the missing piece of the puzzle on their farm.

"All attempts to improve health have cost us a lot of labour, worry and money during those years. With today's knowledge, I urge every dairy farmer to improve the water in the trough." Jan Timmerman makes no bones about it: "It took us years to put our finger on the sore spot, but now when I'm in someone else's barn, I notice it immediately: turbid water and slime in the drinking trough is not normal and a drag on the animals. We too first looked for it in feed, cubicle material and medicines, but remember that drinking water is the biggest part of the ration. A cow drinks at least 100 litres a day!"

Dirt in the pipes

It took the brothers a while to realise this. "We have a good well and a sand filter to go with it," says Jan. We now know that this makes no difference to the bacteria and biofilm, but at the time we thought this was enough for good water. It wasn't until we disconnected the circulation pump that we saw how filthy our pipes were: lots of sludge and slime. We then sampled the water from the drinking trough - not the tap! - and it turned out to be contaminated.

Results with the Watter system

Brother Klaas adds: "Initially we started working with hydrogen peroxide, but this turned out not to be a good solution. It took half a day to clean the pipes and the next day the bacteria started to grow again and the slime came back. After some inquiries, we decided to buy the Watter system. When the veterinarian visited us after three weeks, he immediately noticed that the animals seemed much less dull; their hair was shining." The dairy farmers themselves also saw results within a week: after 3 to 4 days, the water was clear and the slime layer in the drinking troughs disappeared. "We still have to remove feed residues now and again, but it doesn't rot, and we no longer need to brush to remove slime. The water is clear and stays clear."

Jan tells us that he did not take any risks with the investment: "Watter has the reputation of being expensive, but it is the best system on the market and we still enjoy it every day. The costs for the trial and the investment in the machine itself afterwards are nothing compared to all the experimental methods, veterinary costs, medicine costs and labour that they have tried before. Besides that, it's extremely profitable."

Klaas says the gains can be seen in several ways: "Since 2019, our animal dosage has dropped from 4 to 1.5. Clean water has an incredible effect on the health of dairy cattle. Milk, of course, also consists largely of water. The BSK, for example, has increased by 1.3 kg with us since then." They attribute at least 70% of this effect to Watter. "Medicines are now getting past their expiry date in the larder, because we don't need them any more. The animals are fitter, eat better and therefore produce more".

The gentlemen can recommend every dairy farmer to invest in the drinking water: "The water can come in as good as it is: because of the influence of pre-cooler, buffer tank, pipe material and location, whether it is in the manure pit or along the roof: the water gets contaminated with bacteria. Regardless of the quality of the water, pipes or drinking trough. We spend a lot of money on barn equipment and rations, while the water plays a huge role. As a dairy farmer, that's where your opportunities lie."

Is your drinking water okay?