What is HOCl? Or as we also call it: hypochlorous acid. Watter has over twelve years of experience with producing HOCl, and we'll gladly give you some scientific background about the active substance that is mainly used for disinfection purposes.

HOCl, or hypochlorous acid, is widely used as a disinfectant, because of it's oxidizing properties. It is very effective against bacteria, fungi, and viruses. It also has an acidic component, but it's a very weak acid, comparable to citrus fruits.

HOCl is produced with the use of a technology called electrochemical activation (ECA) by the electrolysis of water containing dissolved sodium chloride (salt). This process and the active substance are sustainable and is suitable for humans, animals or the ecosystem. We believe it's the future of disinfection.

Where can HOCl be applied?

Hypochlorous acid has a wide range of applications, where disinfection and hygiene are of high importance. It is used, for instance, in the treatment of process water (e.g. in the food industry), disinfection of the drinking water supply for farm animals or for legionella and biofilm control in medical facilities.

Hypochlorous acid is also produced in the human body by white blood cells to fight infection by acting against a wide range of microorganisms. It is an important part of the innate immune system. This acid has a bactericidal effect and immediately destroys bacteria. Thanks to it's high biocidal activity, it is not cytotoxic to human and animal cells, when applied correctly.

What is the difference between hypochlorous acid (HOCl) and sodium hypochlorite (NaOCl)?

A more detailed comparison can be seen in the table below:

Equilibrium chart on chlorine in solution 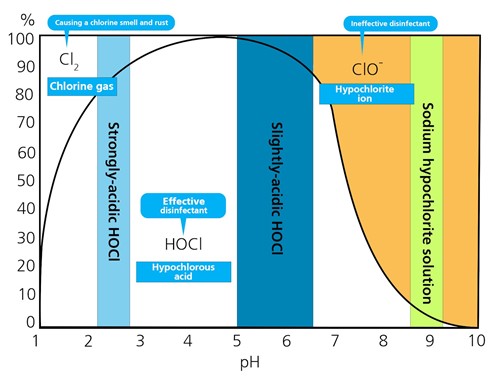 The above graph presents how chlorine composition changes according to pH value in three phases of Cl2, HOCl and OCl-. A lot of HOCl can be formed if the pH of water is between 4.0 and 7.0.

Since HOCl (hypochlorous acid) has been proven to be the main disinfectant, it can be, therefore, used for effective disinfection, although the chlorine concentration is only 10-30 ppm. On the other hand, a sodium hypochlorite solution contains only about 5% of hypochlorous acid, which means that a very high chlorine concentration of around 100 to 200 ppm should be used. The remaining 95% is OCl-, which has a very low bactericidal effect, remains unused and will be discarded in wastewater.

Want to order HOCl as a raw material for your own products? Get a quote from the leading expert in HOCl!

Get a quote now!